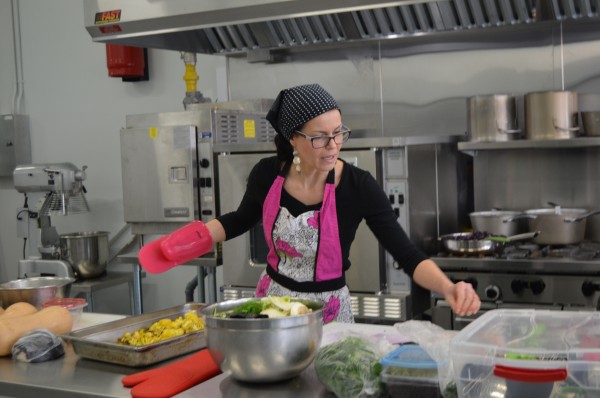 Azura Fennell of The Kneaded Kitchen, at Cauldron Kitchen.

It took nearly two years but the Cauldron Kitchen is finally open for business. “What we discovered is that building a kitchen from scratch is not a simple feat,” says co-founder David Villarroel, who anticipated a summer 2014 grand opening when he last spoke to Apartment613.

Between fitting the Overbrook industrial space with essential water, sewer, electricity and heating services, to securing the necessary funds to design and outfit the kitchen, the vision proved a bigger challenge than anticipated and there were times they nearly threw in the dish towel.

“We passed so many milestones with the construction phase. It was a hard slough,” he says. “It was amazing when we announced our official opening… it is good to focus on business development and getting the Ottawa food industry interested in what we are doing.”

So far, about eight small scale chefs have signed up to use the space. The Kneaded Kitchen’s Azura Fennell is their first regular.

“I decided it was now or never,” says Fennell who was elbow-deep in a delectable-smelling roasted cauliflower dish during an open house last weekend to formally launch the Cauldron Kitchen.

The single mom quit her corporate job right around the time the kitchen opened in order to launch her gourmet vegan/vegetarian pre-made meal business.

“It’s a really great space,” says Fennell who spends a day to a day-and-a-half per week at the Cauldron preparing her meals.

As a mom who needs to be home before and after school, she loves the flexibility the Cauldron Kitchen offers and the fact that all the cooking equipment is provided. It’s also proven to be a great place to network with other foodies who seem happy to support her and offer feedback.

“It’s invaluable,” she says of the camaraderie.

The concept of a shared commercial kitchen is one that’s taken off across the United States and in larger Canadian cities like Toronto and Vancouver.

Strong supporters of the shared economy ethos, Villarroel and business partner Dave Neil, who co-owns Westboro craft butcher The Piggy Market, funded the space, in part, through a little crowd-sourcing and a lot of support from family and friends.

They envisioned a place where resources would be shared and where everybody involved could save on overhead and through bulk buying power. They wished to nurture a community environment where like-minded foodies could swap ideas, collaborate and support one another.

Since they first hatched their plan, similar commercial kitchens have entered the Ottawa market, but Villarroel says the Cauldron Kitchen remains the first to do it as a solely shared model, where anybody could rent the space at an affordable hourly rate. That cost is $25/hour for the 150 sq/ft kitchen, which includes a six-burner range, a standard oven and full size convection oven. A separate prep and assembly space can be rented for $20/hour, though both must be booked in four-hour blocks. They hope to turn a second prep space into another full kitchen down the road.

Industrial induction burners, a gas steamer, deep fryer, meat slicer, dough mixer, food processors, blenders and scales are among the add-ons. There’s also two stand-up freezers, a pair of walk-in coolers and dry-good storage space on site. Package deals and storage bin rentals are available for frequent fryers and a shared dish pit equipped with a 90-second washer and all the cleaning supplies one might need is provided for easy tidying.

In the hopes of attracting local farmers and helping them sustain their businesses through the winter, they’ve also invested in a blast chiller that can go from 160F to -18F in two hours.

Dubbed the “crown jewel” of the kitchen, it’s available for rent for an extra $50 a pop.

“Farmers can come and make their own frozen vegetables and sell it at the market,” says an excited Villarroel, who also hopes to attract food truck vendors with three parking spots out back complete with plug-ins.

“We would like to brand the Cauldron as a place to innovate and experiment,” he adds, noting a local cricket flour processor has expressed interest in using the space. In fact, they see it as a true “community kitchen” that can be used in many ways.

To celebrate Family Day, for instance, a group of kids enjoyed cupcake decorating at the Cauldron. Meanwhile, their first client—an 11-year-old boy who baked cookies for the Beechwood Market—has since expressed an interest in returning to host his next birthday party.

Neil also plans to deliver a hands-on series of workshops on knife skills, chicken-cutting and bread-making in the hopes to draw in amateur chefs looking to improve their skills.

Despite their struggle to get going, Villarroel is optimistic. He recently revisited the website that first inspired his business—a directory of commercial kitchens.