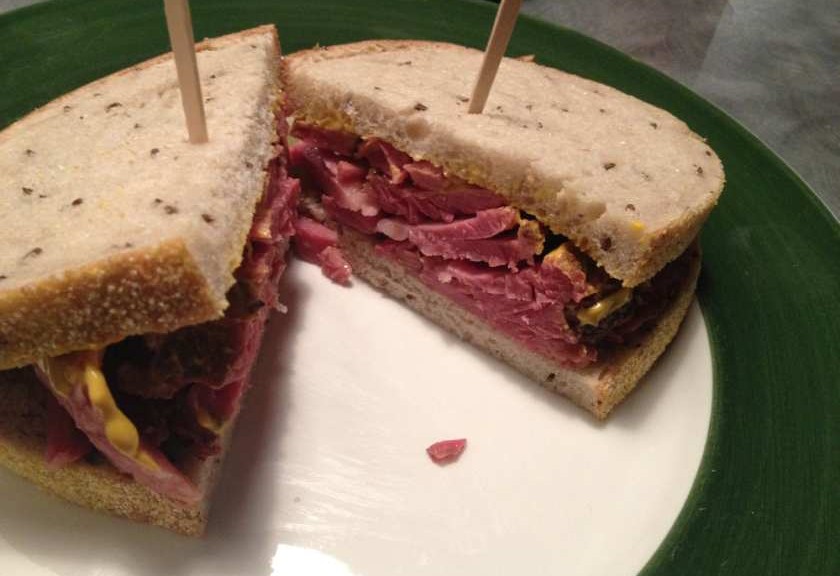 I have loved a good smoked meat sandwich for as long as I can remember.

As Nepean-raised teenagers in the 1980s, we’d make trips to Nate’s Deli on Rideau Street for its storied smoked meat. I was even more keen on the sandwiches from the Villa Deli on Bank Street that my late father and I bonded over.

When I attended McGill University, smoked meat at Schwartz’s, and better still, the Main, beckoned. Those legendary delis served the thick-cut, robustly flavoured real thing, best devoured during the wee hours. In a pinch, downtown, we made do with sandwiches from Ben’s and Reuben’s.

In recent years, I’ve had a hard time finding a smoked meat sandwich in town worth getting excited about. The version at the Grand Central New York Deli, when it was open, was a good attempt, although I thought there was room for improvement. Last spring, I thought the smoked meat at The Butchery in Bells Corners wasn’t bad.

Since then, I’ve begun popping by Meat in the Middle on Bank Street, which opened in the summer of 2014, mostly for the made-in-house smoked meat sandwiches. In recent months, I’ve found that when they’ve been good, they’ve been very good. But one of four sandwiches really missed the mark.

The meat there is Alberta beef brisket that’s been brined for a week or so, and then smoked. Thick-cut to order, the best sandwiches I’ve had here could have been a little more hefty for the price ($9.95), but their rich flavour and luscious texture were really commendable, delivering that primal smoked meat experience — maybe even good enough to support the sandwich board outside the shop that says its smoked meat is the best in town.

The 26-seat shop, where classic rock usually plays, is too unpretentious to call itself “artisanal,” but its chefs, Jeremy McDonald and Bruce Robitaille, can craft some above-average meat, with reasonable consistency.

I did have one smoked meat sandwich this month that was a dud, much too fatty and much too salty. To her credit, Janet, Robitaille’s wife, could see my disappointment — that is, the uneaten, fatty scraps on the plate — and she offered me profuse apologies and a replacement. I want to be charitable because, frankly, recent trips to Montreal’s revered delis have yielded some mediocre and even lousy sandwiches as well as good ones. Perhaps everywhere, it comes down to the luck of the cut.

Other sandwiches that we’ve had at Meat in the Middle were successes. A panini-style reuben was cleanly made, with all of its elements shining through. So was the grilled-cheesy croque madame, although with roast chicken in lieu of ham and no fried egg on top, it departed from its French namesake. A smoked pork shoulder sandwich, perked with gremolata and arugula, was delicious but also extra juicy to the point of messiness.

The shop also serves basic barbecue fare after 4 p.m. But the so-so chicken, with dry white meat, and sloppy, less than memorable ribs made me think that sandwiches remain the shop’s strength. Side dishes though, including a Greek kale salad and some no-frills mac ‘n’ cheese, were quite good.

Meanwhile, more or less three kilometres due west, there’s another sandwich place that puts its appeal to carnivores in its name.

Meat Press Creative Charcuterie and Sandwich Shop opened in early October, the endeavour of the young chef Étienne Cuerrier who has worked at the Wakefield Mill and Soif Wine Bar on the other side of the Ottawa River.

True to the Hintonburg neighbourhood, Meat Press scores high for hipster cred, ambience, and locavorism. Cuerrier sources ingredients from producers such as Enright Cattle in Tweed and Mariposa Farm. He tends a community garden plot and has incorporated its vegetables into Meat Press’s offerings.

Cuerrier’s continually changing sandwiches have been sizeable, even quirky, and pleasingly affordable at $7 or $10 with a drink, such as a refreshing house-made pear or raspberry soda, and a side dish.

Over several visits in the last few months, I’ve sampled a variety of sandwiches and been pleased more often than not.

Perhaps so as not to offend smoked-meat purists, the shop’s chalkboard has offered smoked brisket sandwiches, with long, thin shavings of meat keeping company with not the usual mustard, or even sauerkraut, but marinated avocado and salted cabbage. It didn’t have the meat-bomb satisfaction of your classic smoked meat, but it was a novel and harmonious meet-up that I’d want to eat again. The vegetable curry soup, thickened with cashews, was another win.

Another unconventional sandwich that made me a believer was made with rabbit confit, its fattiness offset by slaw and carrot purée. Mashed potatoes with curds and a savoury gravy made this combo rib-sticking.

A little less noteworthy was a sandwich of unsmoked brisket with aioli and red pepper, and least interesting was a sandwich with lacklustre roast beef, fennel and pickled carrots.

Timing seems to matter at Meat Press. On one weekend lunch visit, the shop had run out of the chicken club made with pork jowl, spicy mayo, kale and mushy peas. Once, when I arrived at the end of the afternoon, there were no sandwiches to be had. Fortunately, some pork ribs ($14) from the showcase they shared with cheeses and charcuteries were very good when they were taken home and reheated.

I’ve been told by Meat Press staff that dinner-hour service, presumably with dishes other than sandwiches, could be happening down the road. Let’s hope so. The best food and practices here so far give reason for high hopes.